Need help choosing the right hydrogen machine? We can help

Hydrogen inhalation devices are available in the United States and are already in wide use in Japan and China. In Hydrogen for Surgery & ICU we saw a high-end hydrogen oxygen inhaler for surgery and intensive care that is under development that will go for thirty thousand dollars when approved by the FDA.

This site is devoted to the different options available for patients themselves and for clinics, units that will deliver most, if not all the benefits of a thirty-thousand-dollar machine for between two and six and a half thousand dollars. Hydrogen inhalers are like cars, if they are not broken they will take you from point A to B. Meaning they all will work because they all put out the same hydrogen and often oxygen gases.

Hydrogen inhalation is an important new therapy that delivers relief for many medical situations including surgery, tissue damage and cellular dysfunction, and diseases like diabetes, heart disease and cancer. Half a million sepsis patients, in America alone, could be saved if every Intensive Care Unit (ICU) installed hydrogen inhalers. Inhaling hydrogen can extinguish the most intense oxidative fires and inflammation. Molecular hydrogen is the perfect medical treatment for oxidative stress.

Most hydrogen inhalers will saturate the body quickly. Inhalation of hydrogen reaches a peak plasma level (i.e. equilibrium based on Henry’s Law) in about 30 min, and upon cessation of inhalation the return to baseline occurs in about 60 min. This levels the field between the different machines when factoring in their different flow rates of hydrogen gas, which range between 2 and 99 percent. Basically, the higher the hydrogen concentration the less flow rate a machine needs to push hydrogen into the body.

The Hydrogen Technologies inhaler is the Mercedes or BMW of the hydrogen inhalation machines. No other machine comes close to touching it in terms of durability, quietness, ease of use and ability to run 24/7 meaning all night long if needed.

This Molecular Hydrogen/Oxygen Generators is the highest quality electrolysis machine on the market. Its patented generator design is made from stainless steel, which is used extensively throughout their machines. Their engineers believe that the use of plastics and polycarbonates may have a detrimental effect on the quality of the gas when used over long periods of time.

Used as directed and maintained at the recommended service schedule, their machine is expected to last well beyond 10 years and can be run 24 hours a day. It outputs 66 percent hydrogen and 33 percent oxygen gas. At 400ml of hydrogen gas produced per minute, it is a high concentration per volume producing machine.

The Hydrogen Technologies machine also produces 200ml of oxygen per minute and its operating temperatures is kept to a very low 40 degrees Celsius. This is important as it keeps the production of water vapor to an absolute minimum which results not only in a higher quality of gas but extended running times without refilling.

The large, 15 plate electrolysis cell and tank capacities in the Hydrogen Technologies machine, allow for the efficient production of gas at a low electrical demand and low operating temperature. This allows the generator to produce a full 1800+ liters of gas per liter of water used. The cooler the machine can operate at, the higher the quality of the gas produced, and the increased life span of the generator and components within it.

When comparing inhalation models, it should be also noted that all the gas coming out of a machine is not consumed because a breathing cycle is generally 1 third inhalation, 1 third exhaled and a third rest. In this scenario, the intended receiver is only breathing in about 1 third of an inhalers gas mixture. Retail Price 6,495 dollars.

The AquaCure is a practical, lower cost, reliable and versatile hydrogen inhaler that will give you years of trouble free service and is loaded with safety features. The AquaCure can be used continuously with minimal maintenance (just add pure water and clean it about once a year). This machine has safety certification, pressure relief, pressure control, variable output, etc., making it one of the best options if you’re looking to own a HydrOxy Inhalation machine. 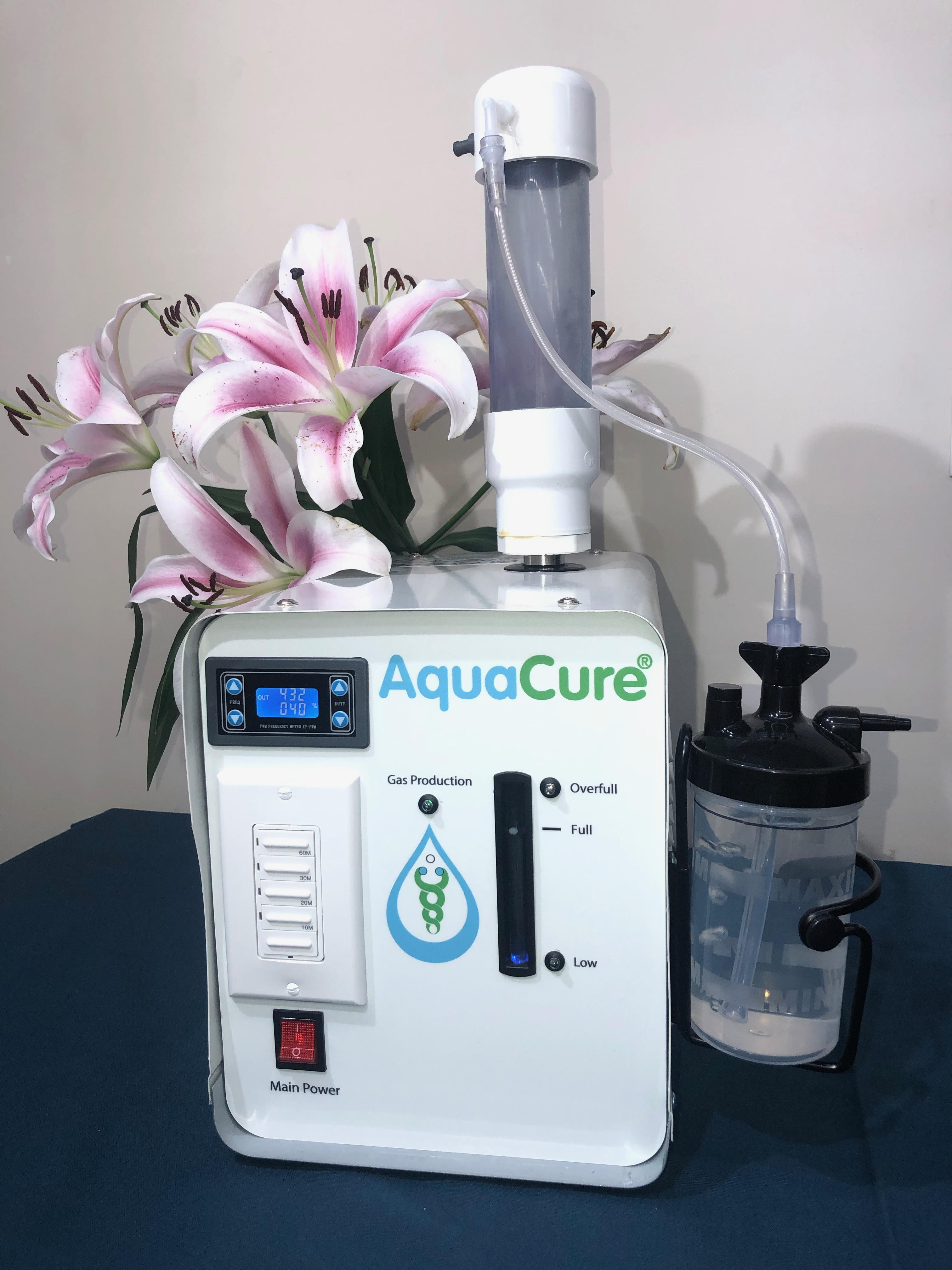 The first two months on hydrogen inhalation I sat working on my computer breathing hydrogen and oxygen gases with my American made AquaCure, which is the oldest manufacturer of hydrogen inhaling machines in the world. I loved it and certainly got a good kick upward in terms of my health, so it is what I recommend for those not able to afford a top of the line hydrogen inhaler. Retail price is 2,499.

Helping you get started

If you need help implementing Hydrogen therapy, you can consult with Dr. Sircus via Skype. He can help you decide which hydrogen inhaler is best for you (at the best possible price), suggest time necessary spent breathing hydrogen gas to receive desired results, and what other therapies would support and fill out hydrogen therapy. One can receive discounts on most machines but above we quoted full retail prices only.